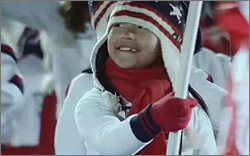 The integration of online and television occur in more than numbers from organizations like the Interactive Advertising Bureau (IAB). An ad from the online site Ancestry.com took the No. 1 spot in Nielsen's ranking for the most-liked new commercial in 2012.

More online companies have begun to use TV to reach audiences. Microsoft's search engine Bing turned toward the MTV Video Music Awards to introduce a campaign asking consumers to take a blind search test. It also ran the TV spot "Don't get Scroogled." Google has also run a series of TV ads.

The top honor for an online company sheds light on how multiplatform approaches will shape consumer TV viewing in the future. The IAB estimates that 36% of digital video screening on mobile phones happens in a room where a second screen -- TV, desktop computer or tablet -- gets used.

As for Nielsen's most-recalled ad, Subway took the No. 1 spot. The ad showed Dean Pelton giving a speech at a ribbon-cutting ceremony for a new restaurant. The No. 2 spot for the most recalled points to another Subway ad, followed by Porsche, Chevrolet, Tootsie Roll, Louis Vuitton, M&M's, Charmin, Chevrolet, and Kit Kat.

Procter & Gamble Co. took the No. 1 spot in the Top 10 U.S. advertisers of 2012. The ads ranking in the Nielsen Tops of 2012: Advertising report ran between January and November.

Strong creatives demonstrated a rise in spending. U.S. ad spend for the first three quarters in 2012 rose 2.5% across all media types from the same time period in 2011. Major spenders include automotive, fast food, telecom and wireless, pharma, retail, motion picture and auto insurance.

The biggest advertisers by spend point to Procter & Gamble, AT&T, and General Motors.

Product placement in ads making this year's top 10 integrate the brand into the story line of television programs, and most placements involved longer-term show sponsorships, which suggest that using a story line to deliver brand messages is effective in both traditional creative and branded integrations.