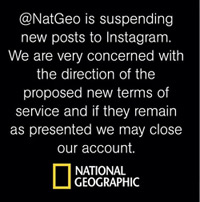 This was all just a big misunderstanding, Instagram co-founder Kevin Systrom seemed to be telling users in an afternoon blog post that back-peddled from the company’s earlier changes in privacy policy and terms of service.  Shortly after issuing updated policies and changed language in its user agreements, Instagram suffered a massive wave of news stories, user revolts organized via Twitter and even a public declaration by National Geographic that it would cease publishing to the image sharing network.

Open-ended and blunt wording in the changed terms of service for Instagram left many users with the impression Instagram planned to use their posts and personal data freely in advertising.  Systrom said in his late-day post yesterday, “As we review your feedback and stories in the press, we’re going to modify specific parts of the terms to make it more clear what will happen with your photos.”

Systrom explained that Instagram’s intention was never to turn photos into advertising. “Our intention in updating the terms was to communicate that we’d like to experiment with innovative advertising that feel appropriate on Instagram.  Instead it was interpreted by many that we were going to sell your photos to others without any compensation. This is not true and it is our mistake that the language is confusing. To be clear, it is not our intention to sell your photos.”

Celebrities, professional photographers and media organizations all raised questions about language in the TOS that suggested Instagram did not have to compensate image owners for any profit the social network made from the images. In fact National Geographic, which boasts one of the largest followings of any media brand on Instagram (645,000 followers) declared via an Instagram image yesterday that it was “suspending new posts to Instagram. We are very concerned with the direction of the proposed new terms of service and if they remain as presented we may close our account.”

Systrom explained that the company’s main goal is to avoid the use of intrusive mobile banners and to employ native forms of advertising. The example he cited involved having a company’s post featured in one’s image feed and attached to the post showing which of the people you already follow also follow this sponsor. “In this way, some of the data you produce – like the actions you take (eg, following the account) and your profile photo – might show up if you are following this business.”

Responding more directly to concerns raised by media companies, copyright holders and artists, Systrom added, “We respect that there are creative artists and hobbyists alike that pour their heart into creating beautiful photos, and we respect that your photos are your photos. Period.”

Rarely has a policy change at an Internet company created such a massive firestorm of press scrutiny and user protest in such short order. The original blog post announcing the changes occurred Monday night, and by mid-day Tuesday, users were organizing efforts to cancel accounts and news stories involving the changes and the controversy had already appeared at many of the major news outlets.