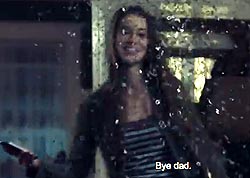 With more people (including parents and teens) on the road during the holiday season, Sprint is taking the time to remind people of the dangers of texting and driving, while also touting its own app that prevents the practice.

With a new advertising campaign breaking next week, the Overland Park, Kan. company and its agency, Team Sprint (Digitas and Leo Burnett), depict the vast array of text messages a teen gets as a swarm of bugs completely encircling them. In the commercial, the daughter, swarmed by the bugs, says goodbye to her father and makes her way to her car (almost getting hit by one as she distractedly crosses the street). But once she gets into the car, the phone turns on the Sprint Drive First mobile application, and the swarm of bugs drops lifelessly to the ground.

“We didn’t want to just report on the statistics and be another public service announcement,” Tracy Palmer, Sprint’s director of advertising, tells Marketing Daily. “We really wanted to promote the solution and the things we’re doing as a company that make parents and guardians aware of our app.”

Available for Android-powered phones, Sprint’s “Drive First” app locks the phone when its GPS detects motion above 10 miles an hour. The app directs incoming phone calls to voice mail and silences distracting alerts. It can also send out an auto response to all text messages, which are held until the driver comes to a stop. (The app costs users $2 a month, but is available for a free 15-day trial through Google Play and also as part of Sprint’s Guardian safety and security services).

“Sprint has had a very serious commitment around distracted driving and making sure we promote it internally and with our employees,” Palmer says. “It’s always been a part of our culture and our company.”

In addition to its ad and app, Sprint has asked its employees and customers to sign a “distracted driving pledge,” supporting DoSomething.org’s Thumb Wars effort (which provides thumb socks as a visual reminder not to text and drive), and worked with companies that develop solutions to reduce distracted driving, as well as creating a public service announcement leveraging its NASCAR sponsorship.

“It seems like over the past couple years, it becomes more and more of a huge issue. As we head into the holiday season, it felt like something we wanted to put out there in a bigger way,” Palmer says. “It’s something you want to keep top of mind. We feel we have a tremendous responsibility from a brand perspective, and it’s absolutely worth putting some emphasis on.”