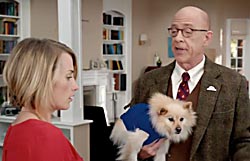 Farmers Insurance is shifting its creative strategy from less silly to helping consumers avoid problems in the first place.

Each spot in the campaign aims to feature helpful nuggets of information. The effort, themed “It’s Smarter to Have a Plan,” debuted Jan. 1 during the Rose Bowl and continued to run during other college football bowl games.

Designed to help consumers become smarter about insurance by showing a number of important and practical insurance tips, the campaign also reinforces Farmers Insurance's position as an experienced company with knowledgeable and industry-leading agents.

“We believe that knowledge is power and that we can help make consumers more confident about their insurance decisions,” he said in a release. “Our new campaign continues to place Farmers Insurance agents as the best-trained agents in the industry, ready and able to provide expert insight to consumers.”

The campaign, developed by the insurer’s agency of record, RPA, is an evolution of its current “University of Farmers” campaign, which features well-known actor J.K. Simmons as the quirky Professor Nathaniel Burke.

In the new campaign, Professor Burke acts as a proxy for actual Farmers agents, helping consumers get smart about insurance, everyday risks and offering practical solutions.

The creative has Burke leaving the confines of the University of Farmers campus to the real world where insurance meets the customer. He will walk with customers through a number of settings and will point out risks that a consumer might not have previously considered.

Farmers believes the ad is a departure from much of the industry’s current advertising, with the focus on helping consumers avoid problems. Rather than focusing on price of coverage explanations, the campaign will feature helpful tips to empower consumers.

The TV spot that launched the campaign is called “Dog Bites.” Professor Burke reminds consumers about the significant impact that everyday events, like dog bites, can have on their lives -- and the need to be adequately insured.

For example, industry data shows that dog bites account for one-third of all paid homeowners insurance claims, while leaving empty boxes by the curb may be a sign to would-be thieves that there are new and expensive targets for them to burglarize inside one's home.

As the campaign continues, additional spots will share relevant facts and preventative tips that demonstrate in a witty and approachable manner that Farmers Insurance and their University of Farmers-trained agents are committed to making consumers smarter about insurance.