To launch a new line of hydrating moisturizing products, Burt’s Bees placed a billboard across from a riverside Minneapolis farmers’ market. The ad showed a bored-looking woman next to copy asking: “Does your skin feel dry and flaky?”

Closer eyes could see that the top of the billboard was affixed with post-it notes; 1,300, in fact. Each piece of paper had a $3-off coupon on the back. What’s more enlightening is that as each sticky note was removed, a new, glowing face was revealed, with the model now smiling next to a jar of intense hydration moisturizer.

Baldwin&, the agency behind the campaign, released a time-lapse before-and-after video online, depicting the facial transformation. 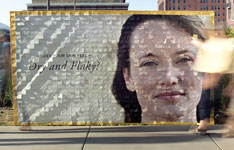 “A Natural Before and After” was 1:35 seconds. In reality, it took five hours for passersby to pluck the coupons from the billboard.

The biggest challenge of the campaign was “figuring out how to cut the ‘before’ billboard into 1,300 pieces and then affix them to the ‘after’ billboard in the same exact spot, without having them either blow off or be too hard to pull off,” said Shaun Sundholm, art director at Baldwin&. “The second hardest thing was waiting and hoping that 1,300 people would show up to take them.”

The agency worked with Street Factory Media in Minneapolis, which “custom built the frame to hold the board, then affixed every coupon -- by hand. I think it took around 16 hours,” said Sundholm.

Minneapolis was selected as the test city because of its quirky reputation and cold, dry-skin-friendly, climate.