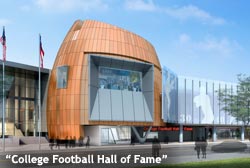 Kia -- whose Sorento SUV and Optima Sedan are built in West Point, Ga. -- is also founding partner of the $66.5 million, 94,000-square-foot College Football Hall of Fame in Atlanta. The hall, slated to open in fall 2014, is being moved from South Bend, Ind., near Notre Dame, which shuttered at the end of December.

Tim Chaney, director of marketing and communications for Irvine, Calif.-based KMA, tells Marketing Daily that sponsorship of the facility -- which is downtown near Centennial Olympic Park, Georgia Aquarium and World of Coca-Cola -- is a long-term arrangement. "We are one of four founding partners, all of whom are Georgia corporate citizens, so this was a major reason to get involved. Plus it's an opportunity to associate with a facility and organization that will get about half a million visitors per year in a spectacular location smack in downtown Atlanta," he says.

The official status gives Kia displays and branding opportunities, per the company. The hall will comprise 30,000 square feet and a 45-yard-long indoor football field-like event space.

Chaney says the partnership was inked as a mutual deal with the state of Georgia (which will handle road improvements benefitting the building along with the city of Atlanta) and the group overseeing the venue, the non-profit Atlanta Hall Management.

Kia gets a permanent branded exhibit in a wing of the hall, and placement of multiple vehicle there, notes Chaney. He concedes that there has to be a give and take in terms of both sides trying to figure out some kind of natural, organic presence for Kia -- "not forced or contrived, but that provides interactivity for Kia and college football. It will serve the needs of both." He says that while the automaker won't do any direct marketing for the Hall, it will associate where it can with their activities, outreach and promotional opportunities.

"This is a good opportunity in and of itself for a variety of reasons: it is an opportunity to engage with college football fans in an education and family-oriented environment; football is a passion in the South; and it's a great addition to our portfolio of sports marketing programs, including the NBA, LPGA and motorsports, as well as the SEC and two bowl games."