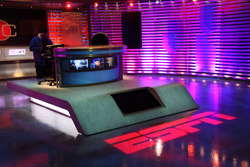 ESPN landed the pole position in one survey of advertising decision-makers who suggested they intend to spend more on the sports network, appreciate its multiplatform opportunities and welcome its programming environment.

The data from Beta Research Corp. had 53% of 200-plus executives saying they plan to boost spending on ESPN over the next 12 months. Also, 63% gave ESPN and sibling ABC Sports top or near-top marks for offering “creative/innovative multiplatform opportunities.” And 83% did so for providing “a desirable programming environment” to advertise.

ESPN led in all three arenas across cable and broadcast networks. How much the finding has to do with advertisers’ increasing interest in sports programming or the skill of the ESPN sales force is unknown.

In the category asking about plans to increase spending on a particular network over the next 12 months, TBS finished second at 47%, and USA was third at 45%. Discovery Channel (44%) and Food Network (44%) rounded out the top five. (ESPN2 was listed separately in sixth at 42%.)

The Beta Research telephone survey of 220 decision-makers (150 at agencies and 70 on the client side) took place from July-October 2012. Research covered 44 basic cable networks and the Big Four broadcasters.

Beta's five-point scale metric was also used to rank networks with a “desirable programming environment” and 83% gave ESPN a 4 or 5, with Discovery Channel in second at 79%, followed by a pair of Scripps properties (Food Network at 78% and HGTV at 75%) and ESPN2 at 73%.

The Big Four performed considerable better as far as the appeal of their upfront presentations. CBS led the Big Four with 76% giving it a 4 or 5, tied with Discovery Networks among all options. ABC and Fox at 75% tied with Bravo for second. MTV occupied the third slot alone at 74%, with Turner’s entertainment networks (73%) and sibling Cartoon Network/Adult Swim in fifth at 72%.

Separately, an annual survey of advertising executives on national TV sales organizations from Jack Myers found among dozens of organizations, ESPN and ABC tied for first. The two Disney units were followed by a trio of Turner businesses: Turner entertainment, Adult Swim/Cartoon Network and Turner Sports.

Among eight broadcast networks, ABC was first, followed by CBS, Fox, Univision and NBC. NBC has had some recent management changes.

The Myers work determined rankings based on an online survey of 400-plus industry executives, including agencies and marketers. It took into account factors such as “value for the investment,” “multiplatform brand extensions and integration” and “relevant research support and intelligence.”