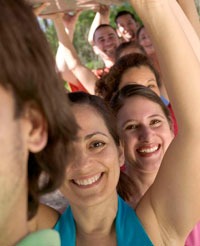 Facial recognition technology has been around for years. But only recently has it been incorporated into TV sets by smart TV manufacturers like LG, Samsung and Panasonic.

The idea is to provide viewers with menus of their favorite shows, apps or social networks once the set is turned on and recognize who’s watching.

Now marketers would like to see the technology applied to ratings so they can get a more precise tally of who is actually watching the set when their ads appear.

Nielsen, which has explored facial recognition technology on and off for more than a decade, is again actively exploring how to apply the technique to its TV ratings panel. “It’s an intriguing opportunity for the whole industry,” said Brian Fuhrer, senior vice president, national and cross-platform television audience measurement.

Given that many devices today have facial recognition capability, from phones to TVs to gaming consoles, “it’s so logical” for the ratings company to adapt the technology as well.

Fuhrer stressed that there’s nothing imminent; the effort currently is “a lab discussion.” The company still has to determine conclusively that the existing ratings panel would not be negatively impacted. That said, if the industry agrees that the technology should be used for TV ratings, the company could implement the technology “fairly quickly,” he said.

Privacy issues remain, acknowledged Fuhrer. But given the ubiquity of facial recognition-equipped devices, he adds: “There’s a tremendous amount of acceptance” compared to just a few years ago. And there’s also a “layer of anonymity” that can be applied to any facial analysis system deployed by Nielsen, Fuhrer said.

In a recent post on his ANA blog, Duggan commented that the technology “will provide an opportunity for marketers to better target ads based on exactly who’s in the room [and] give a more accurate account of viewers in front of the TV.”

Fuhrer notes that the technology is precise enough now to tell not only who is looking directly at the screen, but also how they react emotionally to content. That’s quite a few steps ahead of earlier facial recognition systems that often misread large dogs as people.

Duggan stopped short of saying that facial recognition should be the industry’s top priority in terms of ratings advancement. “It appears that the technology could be of some benefit, and it ought to be in the mix,” he said. At the same time, Duggan said, “we’d love to see some movement on brand-specific ratings,” which the organization has been pushing for since before C3 ratings were adopted.

The ANA is convening a commercial ratings “summit meeting” today to see what steps might be taken to facilitate brand specific TV ratings. The meeting was originally to have been held last fall until Hurricane Sandy intervened.