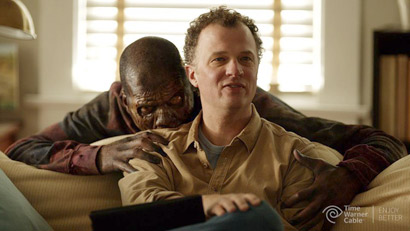 CBS Corp's shows won't be the only TV series promoted during the Super Bowl -- a big time AMC cable network drama will get some play in specific markets.

Through a deal with Time Warner Cable, the AMC network show "The Walking Dead" -- which at times can outpace perform broadcast network shows on CBS in terms of viewership -- has bought 30-second commercials in the big game in key markets.

"Dead" is the No. 1 cable drama among 18-49 and 25-54 viewers, says AMC. The effort is to help promote the show's second half of its third season, which begins on Sunday, Feb. 10 at 9 p.m. ET/PT.  “The Walking Dead” is about what happens the months and years following a zombie apocalypse.

To extend the impact of the spot, Time Warner Cable says teasing content will appear on its Twitter and Facebook areas. On game day, customers can go to Time Warner Cable’s YouTube channel to view two pieces of video right before the game.

The game between the Baltimore Ravens and San Francisco 49ers airs Feb. 3. Five days after the game, Time Warner Cable will launch the Enjoy Shows Better: “The Walking Dead” Sweepstakes on Friday, Feb. 8.