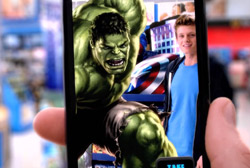 Qualcomm is working to develop augmented reality for more complex 3D objects via affordable phones. The goal is to provide brands with a new revenue stream from virtual items that connect with the physical world.

Jay Wright, head of Qualcomm's Vuforia augmented reality program, describes one example to Online Media Daily as virtual furniture for a physical dollhouse that kids can see through the eye of the camera on a smartphone or tablet.

Success would require putting more mobile devices in the hands of consumers, which is why analyst firm Detwiler Fenton Group, Boston, suggests that Apple embed the company's Snapdragon mobile processor into its next low-end market phone.

If the published report rings true, the deal would create a clean line to Qualcomm's augmented-reality platform Vuforia, which marketers at Sony, Johnson + Johnson, Audi, Lowe's and "Sesame Street" have been using to build mobile marketing campaigns.

Wright said Vuforia allows the camera on the mobile device to become a human eye that recognizes shapes and objects. Developers build the feature into apps. "We believe you should have the ability to point your device at something to connect with more information," he said. "It's a way to support visual search, rather than typing something into a search engine."

Developers and marketers downloading Vuforia for free have already created than 2,500 apps, up from 400 a year ago; more than half were done within the past six months. The brands have been developing campaigns on Android and iOS devices related to product and packaging. The program now allows brands to build in text recognition into the campaigns, according to Wright.

Wright believes Vuforia can bridge the gap for in-store and online marketing departments by forcing discussions between previously competing groups. "We're turning print assets into digital store fronts," he said, as it's a way to sell merchandise from printed material like billboards, movie posters or pages in a magazine.