Can The Second Screen Save Us From The New Tedium Of Super Bowl Ads? 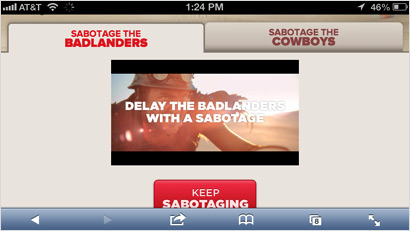 Among the many Super Bowl commercials with second-screen tie-ins this year, my hat is off to Coca-Cola for its Coke Chase sequence. Much like last year’s use of Polar Bears across screens, this campaign again was more fun on the second screen than it was on the first. That may tell us something about the future of TV advertising as well as the increasing tedium of the Super Bowl ad ritual.

The main TV spot that kicks off the effort is a slapstick chase to the bottles of Coke among Showgirls, Badlanders and Cowboys. I am not a big fan of this ad genre myself. I think ads that dramatize consumer obsession with the marketer’s product are poorly aimed fantasies that brands have about themselves that ultimately insult consumers. Still, the zany collection of tribes at play here insulates the brand a bit with comic excess.

The ad points viewers to the CokeChase.com Web site, which is very nicely optimized for smartphones. You get behind one of the three teams not just with a vote but with the ability to sabotage the opposition with comic roadblocks. The Badlanders get a random security check. The cowboys come upon a football in the road that, of course, they must stop to spike.

I admit I am a sucker for silent comedy -- but intentionally or not, the motif is especially apt for both the Super Bowl and the second screen. In the highly social environment of Super Bowl watching, who wants to shush everyone so they can hear the clever banter on an ad and get the punch line? But even better, the wordless second-screen video clips struck me as a brilliant (although probably unintended) model for future ads that push you to mobile Web sites. No one wants to play a video clip with sound while others are watching the main TV screen.

Advertisers who expect viewers to visit their mobile Web sites to complete a main screen narrative might want to keep this little detail in mind. Mobile Web is not the Web. Unless the user is actively engaged in video content with sound, it is as likely as not that they are in a place or situation where audio is not welcome.

The larger point that the Coke ad underscores is how we might be approaching a dual-screen ad model where the real funny and creative stuff happens on the second screen, not the first. The premise and setup spot for the Coke Chase sequence was clever enough in that bland and predictable way most Super Bowl advertising now seems to embrace. It becomes more fun on the second screen in the little blackout sketches that subvert your team’s opponents. That is where the groups get a character and the core conceit gets some edge that is memorable and endearing. The little bits even helped me forget that I generally don’t like these sorts of ad premises.

I recall that the Polar Bears used in last year’s Super Bowl ads had a similar second-screen role. If you followed the site where bears were watching the game and responding to the live score, their antics were funnier and more engaging than the TV spots.

On the whole, the Super Bowl ads were unimpressive, and that is being kind. As Hipcricket CMO Jeff Hasen wrote to me last night, “the telecast had a 1983 feel to it.” There were scant calls to action that targeted the millions of mobile device owners sitting in living rooms everywhere. CBS didn’t even promote its own excellent CBSSports second-screen experience much. This site, very well-optimized for tablet touch interactivity, was complete with multiple camera angles, replays of the commercials and rich, diverse Twitter streams. There were a lot of hashtags floating around the ads, but it wasn’t clear to me that this was much more than an effort to win the buzz bowl of social commentary about ads.

When brands are cloying to impress us, and we accept the role of ad judge, then what are we responding to anymore? Are we registering any authentic impact or are we evaluating the impact we think the ad is supposed to have? There is a real postmodern vibe to all of this now that gets in the way. When we see Super Bowl ads about making Super Bowl ads (Samsung's Seth Rogen, Paul Rudd spot) then you know that this shark got jumped a few years ago.

The second screen offers intimacy with the audience that liked or got the main TV joke enough to pursue it on another channel. Here is where the brand may be in a better position to exercise the kind of creativity and risk, whimsy and depth they can’t pull off on the main screen.

mobile, super bowl, tv
1 comment about "Can The Second Screen Save Us From The New Tedium Of Super Bowl Ads?".
Check to receive email when comments are posted.
Next story loading