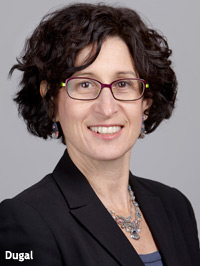 Despite the continued strength of e-commerce and the constant lamentations from retailers about showrooming and online cannibalization, new data from consultants PwC shows that shoppers are actually spending more with their favorite multichannel retailers.

The report, which included more than 11,000 shoppers in 11 different countries, also debunks the threat of showrooming, and finds that while 23% of its respondents research consumer electronics online and then go to a store to buy the product, only 2% do it the other way around.

Lisa Feigen Dugal, PwC’s U.S. retail & consumer sector advisory leader, fills Marketing Daily in on why so many marketers get sucked into myth versus reality.

Q: What struck you as most surprising about this data?

A: I tend to look at things as a whole. Technology is clearly creating a lot of change, and it’s easy to look at any one data point and go right to the hyperbole, around things like showrooming cannibalization. But these changes are evolutionary. There are no U-turns. Beyond the myth and the hype, patterns are shifting, but there’s still plenty of time for retailers to get on board.

Q: Another myth you guys put to rest is this idea of an emerging global consumer -- that since we are all shopping on the same Internet, we are becoming increasingly alike. Can you explain?

A: Yes, no matter how global multichannel retailing is getting, we see little evidence for a global pattern of consumer habits or preferences. There aren’t even many similarities in developed markets. We’re so used to the segments here in the U.S., we understand that there are the haves and the have-nots, that there are gender differences, and that even beyond demographics there are behavioral differences -- impulse shoppers versus bargain hunters, for example. But even though we understand that about the U.S., there’s this tendency to think other countries will be all the same. And they’re not.

Q: Are there overlooked opportunities there?

A: In many markets, people are just emerging as consumers -- they are just learning. So while you can’t make assumptions about them, you do get to help them define their preferences.

Q: Can you comment specifically on food marketers and retailers, who seem to have to play to more cultural differences than other stores?

A: Again, not every grocery shopper is the same, and we’ve recently published some new insights on that as well. But there are similarities across the board, and we know that above all, food shoppers want expediency and service. Some demographics will actually pay quite a bit more in order to have more knowledgeable people in stores. So again, success requires great profiling of what customers want and expect. One of the things that didn’t fall high on the priority list is technology. They want an efficient checkout, but they want an attendant there.

Q: Okay, so back to cannibalization -- the idea that because a shopper can buy anything online, and online sales are rising, that must mean they are spending less in physical stores.

A: The idea that selling online takes away from your physical store just doesn’t hold up. In the U.S., 56% of shoppers are spending more money with their favorite retailers since shopping across multiple channels. In Russia, it was 49%. And in Brazil, 68%. The catch is that they have to be in the preferred circle of multichannel retailers. So stores shouldn’t shy away from these channels. If you delight consumers, they’ll spend more.