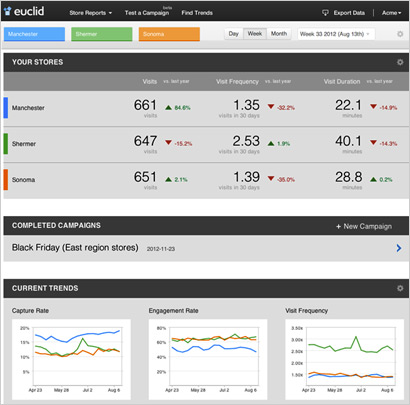 Euclid, a startup that bills itself as the “Google Analytics for physical world,” has raised $17.3 million in a funding round led by Benchmark Capital and including New Enterprise Associates, Harrison Metal Capital and Novel TMT Ventures.

That brings the company’s total raised to $23.6 million. Euclid offers a system that allows brick-and-mortar retailers to track consumers' shopping habits via their smartphones. It uses preconfigured sensors placed in stores to detect Wi-Fi-enabled phones and use their MAC addresses as unique identifiers for each handset.

Businesses can utilize the technology to see how many visits per month a customer makes, the number of days between visits and the “capture rate,” for window shoppers. The aim is to give physical retailers access to user data that online businesses employ.

“One of the big differences between online and offline retail is that online retailers in general are more savvy about using data and about optimizing their sales process using data,” said John Fu, Euclid’s director of marketing. He cited Amazon, which tailors each customer’s experience to past purchases or browsing habits.

Euclid provides its Wi-Fi sensor, which is the size of a deck of cards and covers an area of about 24,000 square feet, to retail partners for free. It charges $200 a month for the in-store data on a subscription basis. That information is presented through a dashboard similar to Google Analytics.

Euclid’s tracking technology raises privacy questions. In that regard, Fu explains that the company “hashes,” or scrambles, smartphone MAC addresses before storing the numbers on its servers to help protect users’ anonymity. It also requires that its retail partners post signs in stores informing shoppers about how to opt-out of the data collection process.

Consumers opt out via the Euclid Web site by entering their MAC address to stop the company from recording in-store activity associated with that number. Fu added that Euclid doesn’t track anything people do on their phones while shopping.

With the new funding, the 20-person company plans to add more engineering and product development staff and continue expanding its business.

In connection with the financing, Euclid has named Benchmark partner Bruce Dunlevie to its board of directors.