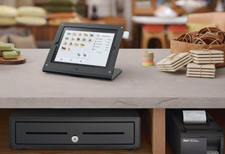 The mobile payment system that is popular with service businesses and taxi drivers everywhere, Square, is now taking cash. Late last week the company launched a new “Business in a Box” product that puts a connected iPad, cash drawer and receipt printer at a business countertop. At $299 for the basic tablet software, tablet stand and cash drawer, $599 with a printer, the platform is designed to let an SMB take cash as well as the usual Square mobile payments.

The setup basically adds the familiar Square card reader dongle and Square Register iOS payments software to an existing iPad. The iPad stand and cash drawer simply allow the business to expand to accepting cash more readily and have a larger point-of-sale footprint and interface.

Square made a splash among small businesses with its simple and cheap credit card processing via anyone's iPhone. The merchant pays just $2.75% of the sale per swipe of a customer card or a flat monthly fee. Funds are deposited directly into the merchant's bank account within days.

But Square has been expanding its business model to enable m-payments for consumers at a wider range of retailers, including a deal with Starbucks to accept payments from the consumer-facing Square Wallet.

Square is not alone -- or first to market -- with an inexpensive point-of-sale solution using tablet technology. As Wired points out in its first look at the Business in a Box platform, merchants can also get similar solutions from GoPaGo and Shopkeep. Square, developed by Twitter co-founder Jack Dorsey, has attracted over $200 million in funding. In addition to deals with Starbucks and the mobile wallet, Square has launched a gift card program in recent months and partnered with Angie's List to increase Square distribution to local service merchants.