Does Microsoft Windows 8 OS Make You Click On More Ads? 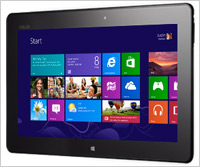 Yes, in my opinion. Here’s why.

In the past two weeks I’ve become pretty familiar with Windows 8 on a Microsoft Surface Pro tablet, as I've been clicking my way through the Internet, touching and watching every rich media ad that serves up.

The Bing team continues to working closely on Windows Blue, the next major update to the Windows 8 operating system (OS), to improve search, according to a reliable source. Other reports suggest we will see several improvements that take search deeper into apps on phones and desktops -- not by selecting them, but rather though actions or intent, by “extending the search abilities of the OS." It also will have closer ties to Internet Explorer.

Translated from the Chinese-language site Win8China explains Microsoft’s plans to publicly preview Windows Blue within the next few months.

We are also told to expect a touchscreen from Google on Chromebooks. With more people using smartphones and tablets, the experience of touch needs to extend to the laptop and desktop. It will not only make designing campaigns easier, but it brings continuity -- proven to increase use -- from one device to another, making behavior more important than the hardware.

Touching something makes it much more personal. Pick your hands up from the keyboard and touch the image on the screen -- watch it move. I'm not sure voice search like Google Voice or gesture search from Microsoft Kinect will have the same impact, but I’ll admit it sure makes searching easier -- as long as the engine, offsite or onsite, can match the correct words and identify behavior.

Designing campaigns around touch become psychological. (Here’s an interesting tidbit about how touch makes things more personal. A reliable source tells me more murderers use a gun (not their own) rather than a knife, because there’s no need to touch the victim, making it less personal.) No commonality in examples, just digging into the psychology behind touch.

Brands wanting to get personal will design campaigns requiring consumers to touch the screen. Earlier this month, Microsoft revealed working with four advertising agencies to make touch part of the brand experience in Windows 8 on Surface tablets, but that experience extents to a slew of new touchscreen monitors now available as part of desktop computer packages. Ad agencies Razorfish, Team Detroit, This is Tommy, Universal McCann and Sapient created the concepts, unlocking storytelling through gesture.

Sony tells me my repaired laptop should arrive today. I will probably have to upgrade my laptop to Windows 8 and purchase a touchscreen, because I’ll miss the ability to reach out and touch something. Let me know if you have designed search or other campaigns based on exploring touch.