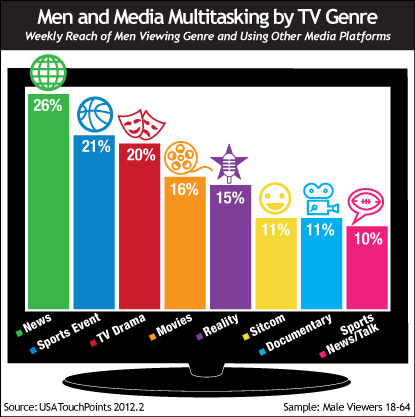 Concurrent use of media has been with us at least since people sat and read their magazines or newspapers while listening to the radio. Now, there are many more combinations that feature in the media use mix. This USA TouchPoints analysis breaks out the weekly reach of any media multitasking among male TV viewers 18-64.

For the purpose of this analysis, we define multitasking as using other media in the same half hour as viewing specific TV genres.

The range across the genres listed is not particularly large -- only 16%. Without news, it would only be 11%.  This is consistent with a previous Whole Story analysis looking at the reach of Second Screening behavior by genre on a daily and weekly basis, where the range of difference for weekly reach was only 9%.

This analysis, however, includes more media than simply cellphones and tablets; hence, we see higher overall numbers, despite the fact that only males are included.

Much of the activity is likely driven by the constant presence of the cellphone and its multiple functions. This device, along with the laptop, and to a much lesser extent the tablet, will also be the means by which various forms of Social TV related activity take place, such as Tweeting or posting on Facebook about content. However, this analysis does not draw conclusions about how much media concurrent media use relates to TV content. Viewers could just as likely be checking work emails or reading the newspaper.

Part of Sports Events reach is undoubtedly driven by the activity of Fantasy Sports fans following the progress of multiple games and players at the same time, while TV Drama is probably more readily aligned with the weight of its presence on the broadcast schedule.

News may be something of an outlier that would benefit from further analysis. It is possible that the higher levels of media multitasking may be impacted by the fact that local news programs are shorter, but also by the narrative structure of news programs.

Whereas Dramas hold the attention through a storyline that unfolds throughout the program, News comprises a series of unrelated, self-contained stories that are likely to be of varying degrees of interest. Therefore, it is more or less engrossing depending on the individual.