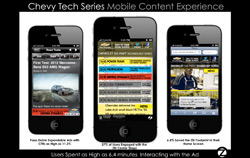 "We see a trend where some of the business models that grew up through smartphones and tablets are trickling back to desktops through Windows 8," said John SanGiovanni, co-founder and VP of product design at Zumobi, which Microsoft spun out in 2006. "We are working on some cool approaches that think about advertising in this highly adaptive way."

Insights learned from mobile publishing, distribution, monetization and advertising will become essential when thinking about how content gets consumed on desktops and televisions, SanGiovanni said.

About 6.8% of users saved the Chevy integrated content to their home screen via the ZBi Footprint feature, creating an app on their mobile device. That same experience will have an option to move to desktops in the future, especially as smartphones and Surface tablets become what SanGiovanni calls the "personal computing core," plugging into large monitors to power desktop experiences.

Every couple of weeks, the app released new content. Commonwealth, the agency venture between IPG and Omnicom's Goodby Silverstein & Partners in Detroit, worked with Zumobi's internal team to design the branded campaign to resemble an app.