In the race to become Madison Avenue’s “enterprise” data-processing platform for managing media buys -- especially digital ones -- Chicago-based Centro next week will unveil the first installment in a suite of new cloud-based software applications that it claims will automate many of the worst labor-intensive tasks done by agency media planners. The software, dubbed Centro Planner, is designed to simplify and automate many of the most repetitive manual tasks associated with planning, which it asserts will free planners up to focus on higher-value tasks such as strategy and analytics.

Madison Avenue is “full of broken operations,” says Shawn Riegsecker, CEO of Centro. He says that despite attempts by other systems and software developers, including industry giant Mediaocean, most planners still process plans by manually keying data into stand-alone software applications such as Microsoft’s Excel or Word programs, and then re-keying them into their agency’s enterprise system when they go to order to be transacted with media vendors.
He claims the main reason why planners don’t work “end-to-end” within their enterprise software systems is that the planning software that has been developed to date isn’t really designed with planners in mind and that it’s simply easier and more intuitive for them to work with spreadsheets and offline software programs.
Other big enterprise system developers including Mediaocean have cited similar frustrations, and claim to be developing even better, more intuitive, and more user-friendly planning, buying and campaign management systems -- and many of them no doubt will be unveiling their latest versions alongside Centro next week at the 4As conference in New Orleans.
Meanwhile, Centro says its new planning software has been beta tested for 90 days with nine major agencies and one big agency trading desk, and the reviews have been positive. An early version of the software was even battle tested in the field during one of the highest-stake and more rigorous media planning accounts in recent times: President Obama’s reelection campaign.
Centro was one of the “media logistics” suppliers to the Obama campaign, and Riegsecker says its planning software gave the reelection team an unprecedented ability to turn campaigns around in real-time.
“It absolutely speeds things up,” he says, citing an example that happened during the second debate, when it appeared midway through it that Obama had regained the momentum vs. GOP challenger Mitt Romney (after failing miserably in the first debate).
“It’s 9:30 to 10:00 at night, and they were able to create a sliding billboard campaign and get it in all the swing states by the next morning,” he recalls, adding: “That normally takes digital agencies a week to a week and a half to put it together, and we had all the contracts signed by 10:00 in the morning.”
Centro said two other new software applications in its suite -- a campaign management program and a financial program -- will be released later this year. 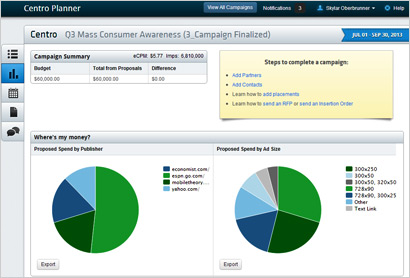