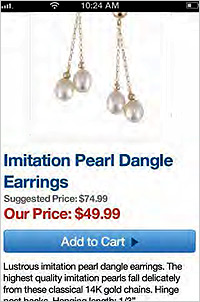 Online marketers might have to revamp their Web sites in order to ensure that mobile users can easily view any disclaimers, the Federal Trade Commission said Tuesday in its long-awaited update to truth-in-advertising guides.

The FTC's updated dot-com disclosure guides recommend that marketers clearly and conspicuously disclose all terms, conditions and disclaimers to consumers -- including those who access on small mobile screens. The agency adds that some companies might have to rework sites that were originally designed to be viewed on desktops.

"Unless a Web site defaults to a mobile-optimized (or similarly responsive) version, advertisers should design the Web site so that any necessary disclosures are clear and conspicuous, regardless of the device on which they are displayed," the report states.

"Among many other considerations, if a disclosure is too small to read on a mobile device and the text of the disclosure cannot be enlarged, it is not a clear and conspicuous disclosure. If a disclosure is presented in a long line of text that does not wrap around and fit on a screen, it is unlikely to be adequate."

The previous guides, which came out in 2000, focused primarily on banner ads and Web sites. Those guides -- like the ones issued on Tuesday -- make clear that advertisers must disclose all material information to consumers. But the specific examples in the old guides dealt with issues more relevant to ads viewed via desktops. For instance, the 2000 guides said that if companies placed disclosures at the bottom of a page, the design should encourage consumers to scroll down.

The new guides indicate that some sites that were designed to comply with the old guides won't necessarily meet with approval today. "A disclosure that would appear on the same screen of a standard desktop computer might, instead, require significant vertical and horizontal scrolling on a mobile screen. In evaluating placement, advertisers should also take into consideration empirical research about where consumers do and do not look on a screen," the report says.

The upshot is that some marketers will have to roll out new, mobile-optimized sites, according to Jeffrey Greenbaum, an advertising lawyer with Frankfurt Kurnit Klein & Selz. "It's a big warning to advertisers that they need to review their Web sites on a mobile device, and make sure that everything works there," Greenbaum says. "It's a very, very broad recommendation, and one that could require advertisers to make substantial changes in the way their Web sites work."

The FTC also tells marketers that they shouldn't advertise on small screens if it's not possible to make prominent disclosures there.

Overall, the recommendations signal that "lack of space is no excuse" for failing to inform consumers about key conditions, says advertising lawyer Linda Goldstein, chair of the advertising, marketing and media division at Manatt, Phelps & Phillips. "You're going to have to make those disclosures regardless of the format you're advertising in," she says.

The new guides also include relatively restrictive guidance on hyperlinks -- which the FTC says should not be used to convey disclosures that are "an integral part of a claim or inseparable from it."

Instead, integral disclosures should be "on the same page and immediately next to the claim."

The FTC also specifies in the new recommendations that key terms and conditions need to be disclosed before consumers make the decision to buy -- meaning before they place items in their shopping cart.