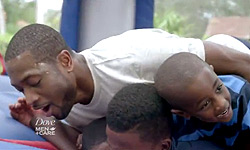 As college basketball fans everywhere gear up for the coming weeks of March Madness, Dove Men+Care is switching the focus from free throws to fatherhood.

Called “Real Moments,” the new campaign stars basketball legend Dwyane Wade and Jay Bilas, ESPN’s college sports analysts, in a series of spots that start out as if they are offering how-to sports advice. But instead of staying courtside, the camera shifts much closer to home. Rather than pumping iron in his “How to stay in shape” spot, Wade is instead hefting his young sons. (Wade is also the author of A Father First: How my life became bigger than basketball.)

Bilas’ spots focus on older kids. “How to prepare for the big dance” turns out to be about him instructing his teenage son in how to tie a bow tie. “How to master the drive” has him flinching in the passenger seat while his daughter backs down the driveway.

Each of the four spot ends with the tagline, “Care for what matters.”

The spots will air on CBS and Turner Sports throughout the tournament, scheduled to start on March 19, as well as on YouTube and Facebook.

While the TV spots have a warm-and-fuzzy feeling, the company is reverting to type for its social media effort. In a fun twist on bracketology, with analysis provided by Bilas, viewers can use the brand’s Tournament Toolbox for a chance to win products, tickets and other prizes for eight different match-ups, including a pickup truck full of hot wings, a baby pool full of nachos, or a one-on-one interview with Bilas.