The Name's Garfield, And I Was A Grumpy Cat First 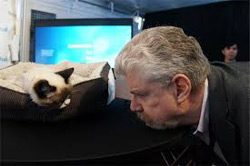 The first thing is, if you want to have a little chuckle, imagine me dropping into SXSW for four days. Yeah -- 30,000 hipsters with knit caps, top knots, black-rimmed specs and piercings… plus me. I am 1000 years old and the only metal I will ever put in my body will be a replacement hip. The young delegates swarmed funkily from panel to panel, bar to bar, saying things like “No worries” and “It’s all good” and “Sweet!” I trudged along saying things like, “Oy” and “How do you do?” and “Where are my pills?”

When I hear the word “media,” I tend to think of television and newspapers. They think of Instagram. They build apps. I take naps. I grew up on Top Cat. They download Grumpy Cat. (And on that subject, how does she get to be a meme? I’ve been grumping for decades and have a large body of work. Plus thumbs. This pisses me off.)

Anyway, generation gap or no, I made my Austin hajj to lecture the digerati on how to understand the media world coalescing around them. Two large audiences of interactivists, half-shaven and dressed in rags, gaped at me, their eyes wide and expressions hungry. It looked like steerage on the Lusitania. Given my reputation for irritability and pessimism, perhaps they feared what I had to say.

They needn’t have, however. I made this pilgrimage bearing emphatically unapocalyptic tidings. The occasion was the launch of Can’t Buy Me Like, in which Doug Levy and I outline sweeping changes in commerce that will yield a more open, more humane, more purposeful business world and society at large.

The gist is this: four forces are converged to render obsolete the opaque, high-handed practices of commerce we’ve grown grudgingly accustomed to. The first force is the disintegration of mass media into tiny fragments, denying advertisers and all institutions of mass reach for their self-serving messages. The second is forced transparency; institutions that used to operate from within solid fortresses are now in Internet-exposed glass houses, their every action and inaction easily accessed and Google-able in perpetuity.

The third force is social media, where all that information is the common currency of social chatter. And the fourth force is the societal shift -- proven both by longitudinal attitudinal data and business-performance metrics -- that the public trust in institutions is now informed more by perceived strong values and good conduct than even the intrinsic quality of the goods and services themselves.

The upshot is the Relationship Era, wherein businesses must earn respect and admiration to prosper. The penalty for misbehavior is dear and the benefit of public trust is priceless. If I’m right, for the first time in the history of commerce, businesses will not only be able to -- but will be obliged to cleave to -- all the standards of ordinary interpersonal relationships, versus the venal culture of maximizing shareholder value by any and all means. Thus, the book offers as its bottom-line advice (and forgive the business jargon): “Don’t be a dick.”

Surely that idea would resonate at SXSW. But did it? Difficult to tell. On the day of my second lecture, I first headed for a book interview in a tent sponsored by the social-media news site Mashable. My slot was at 2 p.m., and as I arrived, the queue of Lusitanians was wrapped clear around the block. Many had been standing in line for hours. All these young interactivists gathered there to see a notorious curmudgeon? Wow.

Well, yes and no. Come to discover, there was another attraction appearing at the same time -- one with a pretty big name, but no thoughts on the emerging Relationship Era or on a humane new model of commerce.

The line had formed for Grumpy Cat.

economy, future of media, social media, sxsw, sxswi
9 comments about "The Name's Garfield, And I Was A Grumpy Cat First".
Check to receive email when comments are posted.
Read more comments >
Next story loading