It's ironic that a real-time blog would be blogging about the month of February when April is only about a week away, but February's data is still very relevant today. The data comes from the new real-time marketplace app from Rubicon Project. Even though this data is about real-time, it isn't released in real-time. As RTM Daily wrote back in February: "Currently...each month’s data is refreshed within two weeks of the next month...Rubicon is looking into ways of making the data even more immediate and real-time."

Helen Jen, director, product marketing at Rubicon, walked me through the app and everything I was looking at. Jen said that while all of the numbers are standardized, they are based on actual data gathered from the Rubicon Marketplace. 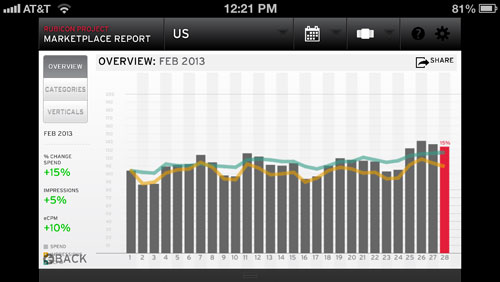 In the US, the most spending happened in the Technology & Computing category. Surprised? I'm not, either.

Personal finance, automotive, shopping, and travel rounded out the top 5 advertising categories in terms of spending. That spending ultimately related directly to impressions; the same five categories filled out spots 1-5 (in the same order, no less) as ranked by impressions.

Food & Drink led all categories as ranked by eCPM, a category it hadn't led in since August 2012. Shopping, travel, and automotive were also among the leaders in terms of eCPM, and were the only three categories to be in the top 5 in each of the app's three categories.

News advertising was a big winner in February, ranking 5th in eCPM after ranking 16th and 15th in January and December, respectively. February also marked the first time that News ranked in the top 5 since June 2012.

For the second straight month, Shopping was the leading vertical as ranked by revenue in the US. Globally, shopping ranked 3rd in the category for the seventh 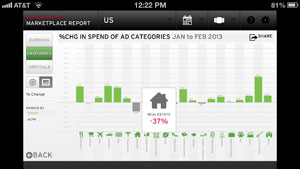 The highest and lowest percent change in spend among individual ad categories in February belonged to Real Estate (down 37%) and Hobbies & Interests (up 105%).

In all, February was a solid month for RTB. A bounce back in the market was expected because January saw large drops in spend (-42%) and impressions (-23%). Even though a recovery month shouldn't come as a surprise, it was just the second time since May - and first since November - that the US's numbers beat the global average in terms of spend and impressions.

real-time, rtb
1 comment about "RTB Month In Review: February 2013".
Check to receive email when comments are posted.
Next story loading