Mini Babybel Gets Its Own Campaign 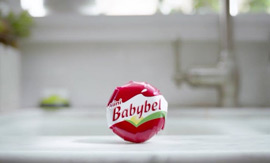 Move over, Laughing Cow. Mini Babybel is getting his own time in the spotlight.

Laughing Cow maker Bel Brands USA has launched a campaign for this brother brand featuring a Mini Babybel cheese with a feisty-but-lovable personality and a distinctly French accent.

In the first TV spot (30- and 15-second versions), dubbed “Manifesto,” the Mini Babybel, dwarfed by his kitchen surroundings, declares “There’s nothing mini about me -- I’m huge!”

He’s also shown being packed in a lunchbox, and flirting with some apples at a grocery checkout (with a vignette of a young adult woman enjoying a piece of Mini Babybel interspersed), all the while singing his own praises: “Flavor…I’m bursting with it. Creamy…I ooze it. Quality like this doesn’t come every day. Well, technically it does, because I’m in the grocery…” The cheese also boasts about the brand’s signature double packaging (outer wrap and easy-to-open wax casing): “Even my wrapper has a wrapper!”

The “Manifesto” spot, airing on national networks, national cable and syndication, will be followed by more TV spots during 2013.

The “charismatic,” “full of attitude” character is being brought to life “across multiple channels where our consumer spends her time,” sums up Waters, adding: “Stay tuned for more fun-loving mischief that Babybel may get into as the year progresses."

Chicago-based Bel Brands USA, a more than 40-year-old subsidiary of family-controlled, Paris-based Fromageries Bel (the world’s third-largest producer of branded cheese, with more than 400 million consumers), has more than doubled in size over the past four years, according to the company.

Together with Laughing Cow’s ongoing “Have You Laughed Today?” campaign, the Mini Babybel campaign continues Bel Brands USA’s expanded marketing push. The company spent just under $23 million in measured media in 2011, according to Kantar Media.