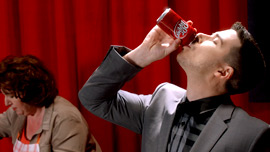 There’s the Axe ad featuring "Teen Wolf" star Tyler Posey getting passed up for an astronaut; “Jersey Shore” alumnus Vinny Guadagnino pumping up Dr. Pepper’s “One of a Kind” campaign; and Josh Horowitz, the host of MTV’s new movie roundup, “Friday Night Wraps,” making the most of an HTC smartphone.

Yes, this weekend’s MTV Movie Awards (and its promotional run-up) blur the lines between entertainment and advertising -- as well as traditional and new media platforms -- like never before.

“Partners come to us with their [brand] messages, and we want to reinforce them in a way that feels organic to our audience,” said Rachel Baumgarten, SVP of Integrated Marketing at MTV Networks.

Likewise, Baumgarten said it has never been more important to complement on-air campaigns with digital “convergent layering.” For instance, in addition to running spots with “Teen Wolf” stud Tyler Posey leading up to the awards show, Axe is also the exclusive sponsor of a “Best Hero” award, which is only accepting votes via Twitter and Instagram. Also, as the official voting partner of the Music Awards, phone maker HTC is guaranteed a strong presence on the show's voting pages.

“We want to create reach on air, and then add layers," Baumgarten said of such multichannel campaigns. "For the most part, the majority of our [brand] partnerships are convergent." This isn’t MTV’s first foray into branded or multiplatform advertising. Previous efforts have included the cast of “Teen Wolf” talking about fashion for Macy’s, for example.

But according to Baumgarten, the network is pushing the envelope to keep up with increasingly ad-immune audiences. “This is the way to bridge the gap between [brand] messages and our talent,” she said.

Representative of a broader industry shift, nearly 80% of marketers say they are investing in branded content, according to a recent report from Forrester -- and with good reason, said Forrester analyst Tracy Stokes. Branded content “has the ability to create brand differentiation by bridging the gap between TV’s emotive power and digital media’s efficient reach,” according to Stokes.