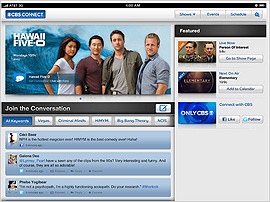 For all of the energy that TV networks and third parties are putting into smartphone and tablet apps dedicated to screen programming, the viewers themselves don’t seem to be rushing toward them. In its annual How People Use Media report, GfK finds that while the average number of mobile apps on users' devices is 22 overall, on average only one of these apps is related to a TV network or a program -- the same number they found a year ago.

Overall, viewers like the idea of their networks offering access to TV content across screens. For instance, the study found that 42% of respondents said they think more highly of TV networks that make shows more freely available. But only 6% of Internet users say they have ever even used TV Everywhere services. And while 30% say a TV network app on a user’s device makes it more likely that they will watch content from the network on regular TV, just 57% of those who do have one or more TVR program-related apps on their device has ever used it to watch a program or a movie. Just over a third, or 36%, have used the app to watch an entire episode.

When it comes to second-screen synchronized viewing, the viewers seem to be as much in test mode as the networks and advertisers are. GfK found that about half of those who have a TV network on their devices have tried it with synchronized content. But it does not seem to be developing into a habit, since only 12% say they use these apps for synchronized viewing often or all of the time.

GfK analysts suggest that the relative stagnation they are seeing in TV network app uptake, as well as a general stagnation in use of TV network Web sites, may have to do with user preference for the social networks that they already rely upon. As much as the TV networks and third-party apps are trying to pile on ancillary content and engagement like trivia contests, less may be more.

apps, content, media measurement, mobile, tv
2 comments about "Viewers May Like The Idea Of TV Network Apps More Than They Actually Use Them".
Check to receive email when comments are posted.
Read more comments >
Next story loading