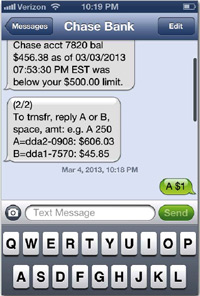 With a score of 71 out of 100 points, Chase led the way, followed by Barcelona-based La Caixa (67), Bank of America (63) Wells Fargo (63), Royal Bank of Canada (61) and Citi (61). In a blog post today on the rankings, Forrester analyst Peter Wannemacher highlighted some of the strengths of Chase’s mobile offerings.

“The bank offers mobile banking services across a range of touchpoints, ranging from smartphone apps, strong mobile Web sites and two-way SMS. In addition, Chase also has strong mobile money movement features, such as bill pay –- including the ability to add a payee –- and mobile transfer capabilities,” he wrote.

Runner-up La Caixa was cited for its ability to make mobile banking convenient, providing features such as allowing users to customize the landing screen on its iPhone app and see a year’s worth of transactions on their devices.

Along with Chase, Wannemacher noted that other North American banks like BofA, Wells Fargo and RBC have built impressive banking services that offer customers extensive functionality on a wide range of devices.

The report found, however, that U.K. banks are lagging their competitors in other countries. Slow to take mobile banking seriously, they were late to launch their own mobile services and haven’t yet caught up. NatWest -- the best of the U.K. banks -- had a score of 57, slightly above the average of 56 across all 15 banks.

Banks have also made it easier to register on a mobile device and log in. Citibank, for example, allows users to enroll via mobile without have to use a traditional PC-based Web site. When it comes to logging in, BofA customers can save their credentials and store multiple users on a single app, while Barclays only requires a PIN code to sign in.

While most banks provide a range of account information, money management features like budgeting are still rare. Transactional options, however, including bill payment, P2P payments and account transfers are becoming increasingly common in mobile. An exception is HSBC, which doesn’t offer any transactions on its iPhone app.

Despite the growth of mobile banking, the Forrester report pointed out that cross-marketing initiatives within mobile properties have been limited and are not tailored to customers.

Among recommendations for improving mobile services further, the study advised banks to pay attention to customer feedback on apps in app stores like iTunes and Google Play. Forrester also emphasized developing context-driven features, like showing nearby bank locations, attuned to on-the-go use.

To tap into the marketing potential of mobile banking, the report suggested banks “go beyond the simple product campaigns, product pages, and calculators that some pioneers have already implemented and start experimenting with time- and location-triggered insurance, savings, and loan offers.”