The Crowd's All Here: Tapping Into The Event Stream 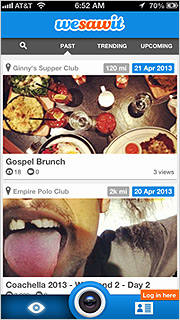 I am the kind of guy who likes the idea of a party a lot more than actually being at one. And I'm sure that is why I really like the idea of the wesawit app that is going nationwide this week. In effect, it taps into all of the crowdsourced content coming from live events around the country. The company scans the millions of media uploads that are going online all the time and then pulls out of the flow and categorizes them into specific event streams of user-generated multimedia. More than just a Twitter feed what makes this engaging is its reliance on visual content. It drops you into the event via a wall of images and videos that feel like a live streaming slideshow from the event.

For instance, the app had an enormous collection coming off of individual days from the Coachella 2013 events. Almost all of it is Instagram, but you don't have to muck around with hashtags to pull it all together, and you can follow individual events so that you were signaled with updates. And of course, you can be used for a range of different events. Between the postings around Coachella there was a nice collection of images around the gospel brunch. The posting collected from the Boston Marathon were a weird mélange of celebration from the early runners who crossed the finish line to the tragedy that unfolded. When place becomes the filter for data, then a time-lapse narrative unfurls.

To be sure, we have seen previous tools that crowdsource events and create online streams, but most of them were hobbled by forcing people to use specific tools. This one just scrapes the location-based user -generated imagery that is rife in Instagram, Twitter and Vine (sounds like a new folk trio) to let the user drop into events. The question, “what happened last night,” gets a rich and different answer when you aggregate the places and events that compelled people to post.

The initial marketing angles for this are pretty clear: white-label version for specific events, sponsored events and categories of events, branded and posted within the stream. The app needs more polish and perhaps some curation before it gets ready for prime time. At some point, a wall of images of drunk couples mugging for the camera is no longer entertaining, and you want someone to point the camera to the stage.

But wesawit does underscore one of the ways in which mobility puts a more intense lens on place. We are talking increasingly about capturing mobile moments as marketers and media companies. In fact those mobile moments are being captured and created by users and are starting to form a new crowdsourced set of narratives around the moment.