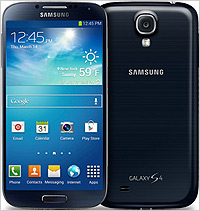 While smartphone shipments and ownership in the U.S. achieved a majority penetration a while ago, the global picture has always been much more mixed. The feature phone -- with its limited multimedia capabilities but strong voice and text channels -- has remained the mainstay of emerging markets. But that seems poised to change as well.

According to the latest quarterly mobile phone estimates from IDC, smartphones out-shipped feature phones for the first time worldwide. In the first quarter of 2013, 418.6 million mobile phones were shipped -- up from 402.4 million units in the year-ago quarter. But of that number, 216.2 million were smartphones, or 51.6% of all shipments.

This tipping point in the phone market shifts the center of power to those vendors that are most reliant on their smartphone lines. And so Samsung continued to maintain a worldwide dominance in the field, with 32.7% of smartphone shipments in the first quarter compared to 17.3% for Apple.

While not quite ready to call it a majority of shipments, ABI Research released very similar estimates. That research firm has seen 405 million handsets shipped during the quarter, with 197 million of them smartphones, for a 49% shipment penetration.

But ABI Senior Practice Director Jeff Orr issued a warning to Apple, which reported decreasing margins and slower growth in its quarterly report. "The last time a major smartphone OEM showed a trend of decreasing margins combined with falling ASPs and slowing growth, BlackBerry was still on the favorable side of a large market share and revenue drop," he stated in the report. "With major product announcements teased for Q3, Apple risks falling behind the innovation curve unless the next iPhone is more revolutionary than evolutionary."

In his quarterly earnings review for investors and reporters, Apple CEO Tim Cook acknowledged the beating that his company's stock had taken in the market in recent months. He promised that new products would be rolling out later this year and early next year from Apple that would demonstrate the company's continued culture of innovation.