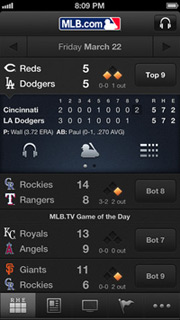 Spurred on by big TV sporting events, men ramped up their sports app usage in the first months of this year.

There have been steady increases around specific TV sports events like the Super Bowl continuing through the NCAA Men's Basketball Tournament and the start of the Major League Baseball season, according to Arbitron Mobile's smartphone panel study.

During the Super Bowl, the NFL championship game on February 3, use of mobile sports apps by men ages 18 and older was at 12.9%. But two weeks later in mid-February, this dropped to 10%.

The category that showed the poorest performance for men was those 55 and older, with 17.2% usage. Of this category that did use sports apps, they posted 50 minutes a month of usage, and 22.5 sessions a month.