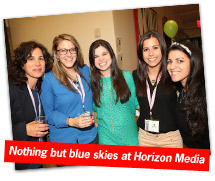 On Tuesday, April 23, Horizon Media opened their doors and their amazing roof deck to 500 women in media, advertising and entertainment for cocktails and networking.

The event was hosted by Horizon Media and Myers Media Business Network to support the Women in Media Mentoring Initiative (WIMMI), founded by Jack Myers in 2011. In just two years the organization has grown from 16 women to thousands across the country, with the goal of supporting diversity and connections among women in the industry. Sounds like something Sheryl Sandberg could get on board with, right? Well, she has. WIMMI was asked to be one of Lean In’s launch partners earlier this year. 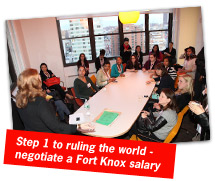 Now back to the party! Horizon Media definitely is doing things right. They have a SWEET office space and even SWEETER employees. In my next life, I want a job here! Plus, they really know how to throw a party: a 40-foot buffet, Horizon blue martinis, tasty snacks and my favorite: mini-grilled-cheese sandwiches floating above shots of tomato soup! (Why on earth did I try to give up carbs this week!?) 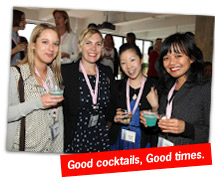 After an hour of meeting and greeting, attendees headed to another awesome space in Horizon’s offices to take part in roundtable sessions on career development, personal branding, lifestyle management and salary negotiations.

In just two hours, WIMMI party-goers had swapped stories and business cards, ate, drank, and learned how to maximize their career prospects, leaving the event with a sense of support and strengthened bonds with future rulers of the world.

Disclaimer – I am a proud member of the WIMMI organization! The group is free to all women in the industry, as well as recent college grads. I hope you’ll join me in supporting the career growth of women in our industry. www.wimmi.net