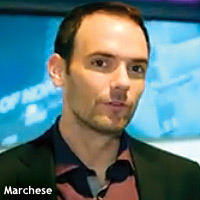 Joe Marchese is pretty fast. And thank goodness he is. About 40 minutes after completing this year’s Boston Marathon, he was in the shower and couldn’t hear the blasts when the bombs went off. Later that day, when a newspaper reporter asked if he would run the race again next year, he said, “Hell yes.” When the reporter asked why, Marchese replied: “Because fuck whoever did this.” Marchese is not easily intimidated, and it was with that kind of confidence that he launched seminal social media marketing platform SocialVibe nearly seven years ago, and it is with the same spirit that he rejoins it as CEO today, following a two-year stint as senior vice president-marketing and digital at Madison Square Garden Co.’s Fuse Networks division.

While it’s unusual for the founder of a digital startup to return as CEO, it was more or less part of Marchese’s long-term plan. A digital native with an irreverence for conventional media business models, Marchese wants to reinvent the advertising, media and marketing world, but he also realized he needed to understand a big traditional media company from the inside out, before he could pull that off.

During his two years at Fuse, Marchese did help to transform the traditional TV network company, helping it to diversify into -- but more importantly, to integrate with -- digital media that helped extend its relationship with its young adult audience of music fans. He did that by launching a dedicated YouTube channel that wasn’t just an online copycat of Fuse’s TV version, but delivered a native experience for online users that the TV network could not. Similarly, he struck a deal with Twitter that led to the development of a new top 10 countdown show tapping into the real-time trending of artists and their music.

After two years of post-graduate schooling inside a big, traditional media company -- working with advertisers, agencies, cable operators, and the occasionally sensitive temperaments of talent and programming executives -- Marchese says he’s ready to go back home and continue his mission to transform advertising, media and marketing by creating a new value exchange between consumers and brands.

Marchese is the first to admit that it’s a work in progress, and the evolution of SocialVibe mirrors it. SocialVibe began with the idea of creating a micro payments exchange that would enable brands to harness the legions of social media users by rewarding them directly for helping to spread their messages, awareness and goodwill. In its earliest iterations, it was not paying cash, per se, but took a philanthropic route, enabling social media users to choose which charities it woud like participating brands to donate money to.

While that model worked, it didn’t scale quickly enough, so Marchese, who was then founder and president of SocialVibe, struck a deal with social gaming developer Zynga that would enable brands to tap the attention of social gamers in exchange for underwriting premium content and upgrades on the games they were playing.

Marchese believes SocialVibe has only just scratched the surface, and in version 2.0, he plans to insinuate SocialVibe as the intermediary between consumers and brands for a wide range of media content that reasserts the bond between consumers, brands and publishers.

As an example, he says, for consumers who exchange the right amount of their attention to a particular brand, that brand might underwrite the cost of a premium subscription to a newspaper like The New York Times, or the cost of downloading a premium TV show or movie.

The current model of passively serving ads to hyper-distracted consumers is a “broken impression game,” Marchese asserts, adding, that fixing it “isn’t really that complicated,” and describing the new media math this way: “Less ads for consumers, more impact for advertisers and greater revenue for premium publishers.” 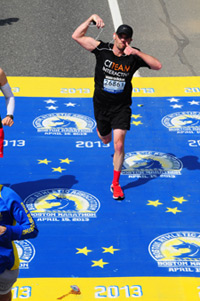