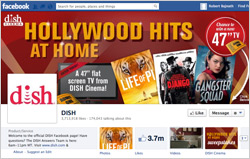 They might not have the biggest social footprints, but a number of brands are distinguishing themselves for their superior social responsiveness. During the first quarter of the year, Dish, T-Mobile and Boost Mobile stood out as top social responders.

More broadly, while U.S. brands still trail the worldwide average social response rate of 60%, they have dramatically improved in this area over the past year, according to new findings from social analytics startup Socialbakers.

“It’s been great to see U.S. brands improve in this respect, using social media more aggressively as a customer service tool,” Jan Rezab, CEO of Socialbakers. “That said, American brands still have a lot of work to do.”

Each quarter, the Prague-based firm calculates which brands around the world are most responsive on Facebook.

In March, Subway, Google, and Target topped a list of brands using social media most effectively to target consumers, which was released by global consulting firm Vivaldi Partners.