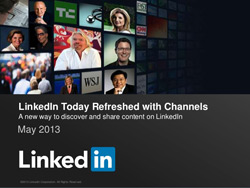 Two years ago, LinkedIn launched LinkedIn Today, a digital newspaper that compiles stories from around the Web based on what a user’s connections and industry peers are reading. On Wednesday, the professional networking site unveiled a redesign of the news site with a refreshed look and a new content discovery feature called Channels.

Through Channels, people can follow more than 20 broader topic areas crossing over different industries, including Your Career, Economy, Social Impact, Big Ideas, Innovation, and Higher Education, with more to come over time. Once someone begins following a channel, they automatically get updates directly to their home page feed on the desktop.

The revamped LinkedIn Today also incorporates the Influencer blog network the company introduced last fall. Along with channels, users can now also access tabs at the top of the page to see a list of all 250 Influencers and top Influencer posts of the day from Arianna Huffington, Richard Branson and Meg Whitman.

People can also still go to their tailored news page, which now has a more image-centric design consistent with the update profile pages. And users’ email digests will provide an overview of top Influencer posts, trending professional news, and Slideshare content all in one place.

The LinkedIn Today makeover and addition of channels are among the latest steps by LinkedIn to boost engagement on the site by ramping up the quantity and quality of its content offerings. Those efforts helped LinkedIn increase member page views (including mobile) 63% in the first quarter, based on the company’s internal metrics.

Getting users to spend more time with more content should also benefit the company’s ad business. In the first quarter, LinkedIn reported that ad revenue rose 56% to $74.8 million, or 23% of overall sales. Its membership increased to 218 million worldwide from 200 million at the end of 2012. The new LinkedIn today is rolling out to all English-speaking members this week.