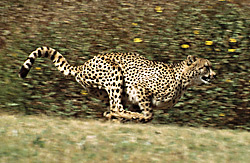 My Internet speed sucks. I'm frustrated with paying Verizon Fios more than $120 for phone, basic television and Internet service, and can't even make it through an hour-long television show without my Internet TV pixelating or video Webcast buffering because it suffers from latency. It's not my computer. I have one of the fastest Sony laptops on the market.

Consumers shouldn't have to pay $10 a month extra for 50/50 speeds. Companies like Verizon should give consumers faster speeds in whatever package they choose to meet demands for bandwidth related to content and streaming -- not just videos, but music, too.

Video and music streams will require faster Internet speeds similar to Google Fiber's 1 gigabit-per-second for downloads and uploads, but at least one data firm expects the search giant to stick with smaller marketers and not expand into cities like Los Angeles or New York.

Google offers Fiber in Kansas City and nearby Westwood, as well as Austin, Texas and Provo, Utah.

Interestingly, research firm IHS Analysts believe Google Fiber will emerge in smaller markets such as Austin and Provo, which collectively have a population of about 1.4 million and roughly 600,000 households -- as well as in the combined populations of Kansas City, Kan. and Kansas City, Mo.

The cities represent only about 0.4% of U.S. households, so even if Google managed to secure a high market share in these metropolitan areas, it would reach only about 0.2% of U.S. homes with the service, according to HIS, which compared subscribers to cable operators like Comcast, AT&T and Time Warner.

Traditional companies are starting to respond with more television advertising and social media. "We've been rolling out out our free WiFi network across our footprint for some time now, as part of our larger strategy to offer significantly more value to our Internet subscribers," wrote Jeff Simmermon, Time Warner Cable director of digital communications. "Austin was in the game plan for 2013, but Google's recent announcement encourages us to deploy our network more aggressively now."

HIS calls Google's Fiber endeavor "risky." Alongside the trials of 2.5-gigahertz service in California, Google is focused on bringing its networks to specific areas to learn about trends in consumer use and a better understanding of how consumers use advertising services and consumer bandwidth.