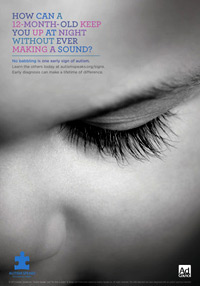 Early diagnosis is an important step to getting effective therapy for the condition.

The PSAs show some of the early signs of autism -- including lack of eye contact, babbling or big smiles -- and urge parents to seek medical attention if their child isn’t meeting developmental milestones. Parents are also encouraged to visit autismspeaks.org/signs to learn more about the condition.

The ads include English and Spanish-language spots for television and radio, as well as creative for print, outdoor and digital media. The Ad Council will distribute the PSAs to over 33,000 media outlets across the U.S.

Earlier this week, the Ad Council unveiled a new digital distribution platform for PSAs, PSA Central, to make it easier for media outlets to download video spots. Participating outlets can download broadcast-quality PSAs in various high-definition and standard-definition formats, as well as ads for radio, print, online, mobile, and outdoor media. Users can also email PSAs from the site.