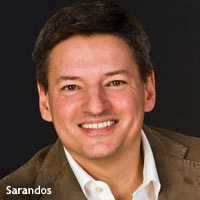 “I think it’s a direct result of our buying power,” he said at an investor event.

Producing serials has traditionally carried some increased risk, since the appeal in syndication pales beside procedurals. But with binge viewing, they carry a certain appeal to Netflix customers. Networks have an opportunity to grab big money by selling to Netflix, and Sarandos believes that is having an impact on the type of shows being made.

While not exceedingly lucrative, Netflix also offers networks an opportunity to monetize cancelled shows, which previously would have been cast aside completely.

“There is still a life for that programming on Netflix … we become the last bit of revenue for some of those series,” Sarandos said. "Every once in a while an "Arrested Development" happens.” With less than four seasons, the show was not a candidate for syndication, but found an audience on Netflix, which prompted the service to produce an original fourth season.

The season launched earlier this week, and although Netflix hasn’t released much in the way of performance data, Sarandos said: “We had extremely high expectations for viewing … and it met our expectations, and we’re thrilled.”

Outside content, Sarandos said Netflix has an advantage now with its service offering an improved streaming experience with little buffering and upgraded sound versus competitors, but he expects that to dissipate. “Over time, those things will find standardization,” he said. Program exclusivity will be the key factor in increasing subscriber figures.

A Wall Street Journal report suggested ESPN is considering paying wireless carriers, so its consumers wouldn’t be subject to data caps for its programming. Sarandos said Netflix isn’t on that path, as "mobile data caps have not been an issue for us.”

“The opposite could be true over time,” he said, if Netflix usage brings its carriers revenue in payments for extra usage.