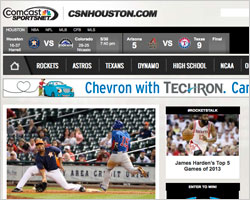 Jeff Weber, who heads content and advertising for AT&T U-verse, offered several examples this week on how set-top-box data can help multichannel distributors. Speaking to investors, he said U-Verse uses its STB information to guide decisions on which channels to carry and bolster ad sales.

Operators like U-verse are increasingly frustrated with content carriage costs and may be more willing to forgo channels. Enter the chance to mine the STB data not just to determine viewership, but engagement, before deciding whether to pay up.

“It gives us much greater insight in terms of the value of a particular channel or piece of content, and we’ve been able to get real clarity on whether we should pay that rate, whether we should ask for a lower rate, whether it’s something that we have to carry -- it works both ways,” Weber said. “It’s been very beneficial for us in terms of the decisions we’ve made.”

In Houston, a larger U-Verse market, AT&T has refused to offer the local regional sports network with Houston Astros and Rockets games.

STB analysis gave it confidence it wouldn’t lose many subscribers by refusing to offer the network owned by the teams and Comcast, Weber said. Reviewing data on viewership patterns for both Rockets and Astros games, AT&T found very few people watched a minimum threshold it used to define a passion level that meant the network was a must-carry.

“It was very clear the viewership intensity in that particular market was low -- and therefore, we didn’t need to pay the rates that were being asked and we’re not,” he said.

On the flip side, AT&T has become the first carrier to sign to carry ESPN’s coming SEC Network. AT&T serves viewers in much of SEC territory. But it looked at viewership levels last year for similar content to determine what will be on the network, then built a model of how viewership would come in.

“The viewership intensity … suggested that’s something we’re going to want to carry and [we] wanted to move quickly to make sure we got the right price when we did that,” Weber said. “Again, it was just the data that sort of guided us on what we needed to do.”

As with advertising, AT&T is looking to offer advertisers the chance to buy audiences, not just shows -- perhaps even across platforms -- and boost revenues.

“If an advertiser wanted to buy ‘Ellen’ … we know based on our data who that audience is," Weber said. "We can go find that same audience outside of the ‘Ellen’ show and maybe extend reach or drive price a little bit better … Typically, people buy a show, we’re able to turn that show into an audience -- go find that audience online, on mobile or on TV.”