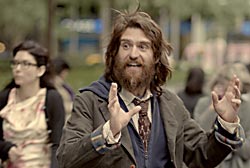 Known as the first company to bring voice-over-Internet telephony to the masses, Vonage is setting out to prove that compassion and capitalism can go hand in hand, with a new marketing campaign that features the introduction of a “chief generosity officer” and a new tagline.

“We wanted to demonstrate our commitment to innovation in a new and interesting way,” Barbara Goodstein, chief marketing officer for Vonage, tells Marketing Daily. “We’ve seen a demand from customers who wanted more flexible solutions.”

In an introductory television commercial, breaking Monday, June 3, a man with unkempt hair and a scraggly beard accosts people on the street of a large city. “Open your ears, people. Your phone company is treating you like you live in the Stone Age,” he tells passersby. “What we need is a company that connects us with generosity.” One man, however, listens closely to the message and suggests “we should talk,” before the spot cuts to the street preacher being introduced as the company’s chief generosity officer, and a new tagline, “Crazy Generous.”

“We’re assuming that people are looking for meaningful connectivity in a hyper-connective world,” Goodstein says. “‘Crazy Generous’ is meant to be more than a tagline; it’s a business philosophy. This is about generous innovation that enables generous connectivity.”

Created by JWT, N.Y., the campaign is meant to focus on Vonage’s “relentless pursuit of innovation,” Goodstein says, noting that Vonage was the first company to provide voice over the Internet phone communications in the United States. “We think of it as democratizing technology,” she says. “We’re disrupting systems and challenging the way people are being treated. We have a holistic suite of communications services, and they’re all part of connecting generously.”

Vonage’s previous advertising featured people talking in front of a pile of crumpled paper about how their phone company wasn’t giving them the service they wanted. These people were then shown crumpling their bill from their previous company (noting it was their last) and adding it to the pile.

The company’s “chief generosity officer” will appear in two more subsequent television ads, in which he’ll explain more about the company’s generous spirit. He will also appear in digital and social efforts, Goodstein says.   “’Generous is a big word, and that was our intention, and it’s consistent with our employee philosophy,” she says. “What we’re focusing on is the generosity of innovation. It’s generosity in an era of conscious capitalism.”