The Whole Story - "On The Go" Video On Rise 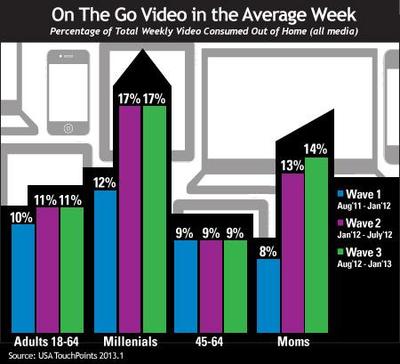 How much of the video content we see in the average week is consumed out of home – or on the go?

As our lives have become more complex and fast-paced, and the number of media devices available to us has increased, so has the range of content available through them.

Whether it’s the ubiquitous TV in the sports bar, the mobile phone, tablet or screens in retail venues, elevators, gyms and taxi cabs, the proliferation of screens amounts to one certainly — an increase in the availability of video content wherever we are.

This USA TouchPoints analysis sought to identify just how much of our total video exposure in an average week takes place “On the Go?” across any and all locations outside of the home. The results form part of a broader presentation to be given at next week’s Advertising Research Foundation Audience Measurement 8.0 by my colleague Kevin Moeller, along with Cynthia Machata of Spafax and Paul Lindstrom of Nielsen. They will address the creation of a marketplace ecosystem for planning and buying out of home video.

We looked at USA TouchPoints data gathered over three waves from August 2011 through January 2013 and focused on Millennials, Moms, 45-64 year olds and the broader 18-64 demographic.