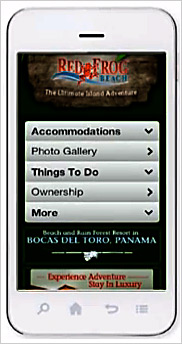 Mobile startup bMobilized has stepped up its mission to optimize the mobile sites of small and medium-sized businesses through a new marketing initiative. The focus is a new site called MobilizingUSA, where SMBs can enter their Web to preview a basic HTML-5-based mobile versions of their sites.

bMobilized CEO Bjorn Holte said the main goal of the effort is to give SMBs a convenient way to see what a mobile-optimized version of their site would look like in order to convince them to convert to an HTML5 version. “If it’s given away for free, people will start using it and see the advantage of having a proper mobile Web site,” he said.

Six months ago, bMobilized began assembling a database of millions of SMB mobile Web sites for conversion through its Automatic Content Identification system, which promises to create a mobilized version of a site in under 30 seconds. The platform uses 300 algorithms to analyze and convert a site’s editorial and graphical elements to a mobile-friendly one that works across multiple handsets and operating systems.

So far, bMobilized has indexed a total of 2.2 million business sites, with 50,000 being added each day. But that amounts to only about 10% of the 23 million U.S. SMBs, an estimated 98% of which don’t have mobile-specific sites. While sites in the database are already fully converted, other businesses can still enter their URLs on MobilizingUSA to see a mobile preview.

The preview shows a before-and-after comparison of the site. Businesses have the option of going live with the mobile upgrade for free on an ongoing basis. By contrast, a conversion done through bMobilized’s main site only offers a free seven-day trial. Sites updated through the new initiative are assigned URLs that include the company’s name followed by MobilizingUSA.com (yourname.mobilizingusa.com).

Through its GoMo program launched two years ago, Google has been among the biggest proponents of mobile optimization. Powering that effort for Google is Duda Mobile, which offers businesses a low-cost service for optimizing their sites for mobile screens. Other players in the mobile optimization business include Mofuse, Yellowbot, DotMobi, and Gumiyo.

Holte said its MobilizingUSA will go on for an indefinite period. He added that the company, which raised $2.5 million in funding late last year, has also had requests to expand the program outside the U.S.