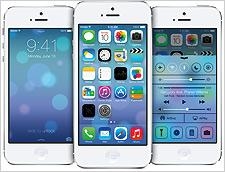 Along with announcing a new streaming music service on Monday, Apple also debuted a dramatic overhaul of its mobile operating system that brings a sleeker design to iPhone and iPad home screens. The new iOS 7 platform launched at the company’s Worldwide Developers Conference, brings a flatter, cleaner look to the familiar interface of app icons.

The revamped design, which Apple CEO Tim Cook called the biggest update to iOS since the launch of the iPhone, includes a new color palette heavy on gray and white, and a thinner typography. Gone is the shiny, 3-D look of thumbnail images. The home screen also has an animation-style background and responds to a user’s movements.

Beyond the refreshed look and feel, iOS 7 also comes with a new set of features. These include full multitasking across all apps, and a Control Center that lets users swipe up from the bottom of the device to adjust phone settings, such as brightness and media controls, access Wi-Fi and Bluetooth, or play a song.

A new camera app features built-in access to live photo features and the ability to view photos based on “Moments,” or locations, rather than just a chronological stream of images. Photos can also be edited within the app using the new filters capability, similar to that found on Instagram and Twitter.

Among other new features is an upgraded version of Siri—iOS’ voice-activated personal assistant—that offers a new interface, the option of speaking French and German, as well as choosing a male voice instead of Siri’s well-known female persona. During Monday’s presentation, Eddy Cue, Apple’s senior vice president, Internet software and services, also said Siri will play a key role in car navigation systems with a dozen manufacturers adding iOS to their cars in 2014.

Apple also aims to make it easier to share content through AirDrop, a tool that shows contacts that are nearby. A user opens the content they want to share and then adds the friend they want to receive it. Once the friend accepts, they can see the material without a network or special set-up.

On the location front, the updated App Store allows people to find apps based on their current location. Apple said iOS 7 will automatically keep apps up to date—potentially saving users a lot of time.  iPhone users will also be able to view notifications without have to unlock the lock screen. They can just pull down from the top of the screen to display notifications.

The new operating system will be available on the iPhone for developers starting today. A final version for the iPhone, iPad and iPod is coming this fall for everyone else.