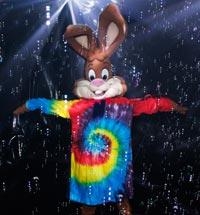 Open free to the public for two weekends (June 22-23 and 29-30), the experiential art installation is billed as "a cosmic portal into your childhood imagination."

The experience, created by installation artists George Zisiadis and Hillary Andujar, is based on a storyline of "creating happiness" in a laboratory.

Visitors are greeted by "Happiness Scientists," asked to suit up as lab assistants (goggles, lab coat, gloves), learn about the process of "distilling happiness," and finally enter The Bubbleverse -- where they are surrounded by thousands of iridescent, "fog-filled" bubbles. (For a video with a sneak peek inside the experience, see The Bubbleverse Facebook page.)

During the learning phase, visitors are asked questions like what makes them happy, their first experiences with bubbles, and if they're fans of chocolate; and during the bubble-surround phase, a scent of chocolate is in the air, reported San Francisco Bay Guardian's Whitney Kidd, who visited The Bubbleverse (and noted that the kids in attendance got a particularly huge charge out of it).

According to Zisiadis (who is also the Chief Happiness Scientist), Nesquik approached him after one of the brand's staff experienced one of his previous installations, looking to collaborate on "a similar type of engaging and inspiring art experience." Given Nesquik's brand attributes of fun, playfulness and happiness, bubbles seemed the perfect choice: "It's pretty hard not to be happy around bubbles," he told the Guardian.

Nesquik views The Bubbleverse as a means of "creatively reaching people in an interesting and engaging fashion," according to its PR rep. The brand isn't offering many more specifics, such as whether The Bubbleverse might make appearances in other cities (although the experience's Facebook page notes that it's "briefly open to the public [in San Francisco] for the first time ever").

The brand also reports that the experience attracted "big crowds" of all ages from the Bay Area during its first weekend.