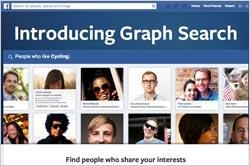 Facebook said on Monday it will roll out Graph Search to everyone who uses the American English version of the site in the next few weeks, following a limited beta release of its revamped search tool in January.

In the intervening months, the company has been making improvements to Graph Search -- aimed at making it easier to find people, photos, places and interests on Facebook -- based on testing with tens of millions of users. That means making it faster, better at showing relevant results and able to understand more ways that people ask questions.

Unlike search on Google, Graph Search is geared to gleaning information tied to users’ social connections through natural-language search queries rather than specific keywords. It allows users to find local friends who like "Game of Thrones," restaurants in San Francisco that nearby friends like, or photos of friends in New York, for example.

During the beta test, early users found it could also reveal more embarrassing information, including “married people who like prostitutes” and “employers of people who like racism.” Such queries turned up more than 100 people.

It’s not hard to imagine that over the last several years, people have forgotten some of the content they have “liked” or photos posted to Facebook. To help users avoid indiscretions that will turn up in searches, it is sending out notices to users’ home pages informing them that “it’s getting easier for people to find photos and other things you’ve shared with them.”

The message also reminds users that they can check to see “who can see your stuff” under their privacy settings. Facebook also emphasized that Graph Search results are tailored to each user, based on what has been shared with them. “For example, if you search for "Photos of San Francisco," you'll see photos your friends took there and shared with you, as well as Public photos,” it stated.

Facebook said it is working on allowing people to also search topics, including posts and comments, as well as extending Graph Search to mobile. For now, search results don’t include information from third-party apps, such as Facebook-owned Instagram. The company isn’t showing ads with results yet, although it’s expected that Facebook will eventually seek to monetize Graph Search as an additional ad revenue stream.

The social network recently killed off its Sponsored Results search ad product, possibly clearing the way for a new ad format to accompany its updated search engine. Even without direct advertising in Graph Search, local businesses in particular may benefit from increased exposure as people use the service to find recommendations for nearby restaurants and other places.

For that reason, following the launch of Graph Search earlier this year, digital agency 360i advised local businesses to encourage check-ins through Facebook Places to increase the likelihood of appearing in search results. “The local effect should explode when Graph Search extends to mobile, so thinking about it now would be wise,” the agency stated in a blog post.

It also suggested advertising on the social network more widely to promote content will also increase in importance “as Facebook evolves into a discovery engine.”