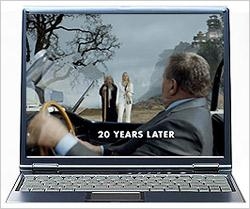 Higher interaction with a TV commercial for viewers comes with watching an advertising message on a laptop/desktop -- not via television, according to a recent study.

In a survey showing 59% of U.S. commercial-watching viewers “having some degree of likelihood to act on a commercial they watch," the best results come when watching on a computer -- some 29%, according to research from Viamedia, a cable sales representative company, produced from a Harris Interactive poll from June 24 to 26 of this year.

Looking at results regionally, TV commercials viewers in the Western states are more likely than other areas to act on commercials, at 38%, followed by the Midwest at 31%, the South at 27%, and the Northeast at 26%.

Sixty-nine percent of TV watchers approve of watching commercials on any on-demand TV programming -- and women approve of it more, at 74% versus 65% for men.

Overall, U.S. TV watchers still prefer watching programming by more traditional means -- with 72% saying they watch cable TV and 33% watching on a device such as tablet, smartphone or computer.

The survey was conducted online in the U.S. by Harris Interactive from June 24-26 among 2,029 adults ages 18 and older, of whom 1,958 watch TV programming. This online survey is not based on a probability sample, and therefore no estimate of theoretical sampling error was calculated.