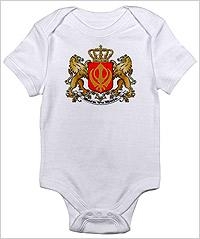 It isn’t just Brits who are crazy-happy about the royal birth: Even U.S. retailers, including Target and Overstock.com, are jumping on Kate and William’s little blue bandwagon.

Retail experts in the U.K. say that the royal birth, which British bookmaker Coral has said was the biggest non-sporting betting event in its history, is expected to provide a feel-good bump to sales there. The Nottingham, U.K.-based Centre for Retail Research estimates that England will get a $373 million boost, with $133 million in festivities, $123 million in souvenirs and toys, and $117 million in books and DVDs. And because of enthusiastic interest from Americans, Aussies and New Zealanders, it expects exports in the range of $57 million.

But the biggest gains are likely to be less directly linked, it predicts, as the trend-setting couple’s choices inspire other parents to keep up with the Mountbatten-Windsors. “We expect sales of prams and pushchairs to rise by 13%, as new parents 'trade up' to more exclusive baby carriages, following a trend that is expected to be set by the royals. The baby carriage will become a must-have status symbol and the lucky manufacturer can expect a similar boost in sales to that achieved by iCandy peach when Victoria Beckham adopted one for her daughter Harper,” it says.

And it predicts similar gains for the lucky marketers of baby clothes, cribs, and toys that the royals choose for their as-yet-unnamed bouncing Baby Cambridge.

Already, the revelation that William has purchased a Teddy Bear from Harrod’s (it’s the store’s annual bear, wearing a pinstripe vest, no pants and named Charles Stephens), has got cash registers ringing. And items from such British brands such as Tesco and Marks & Spencer are flooding the social media universe with squee-producing items, including onesies that say “Keep calm and cuddle me,” “Heir” or “Born to rule,” and crocheted crowns.

In the U.S., Target, which has been featuring get-Kate’s-look maternity clothing throughout the pregnancy, is celebrating His Royal Highness; arrival with a specially edited collection: “We may not know anything about being third in line to Britain’s throne, but we do know about babies (and their first-time moms and dads). Below, we bundled up a few of our favorite pieces that are fit for royalty,” it says, with a collection that includes a baby basket, table lamp and of course, a silver spoon.

Overstock.com is offering décor fit for a royal nursery, with a Union Jack carpet, a Crown Jewels storage seat, and a Prince Charming pacifier.