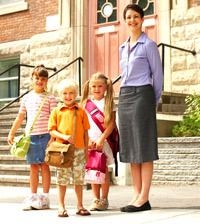 And for the first time, the Internet has ranked in first place in terms of learning about back-to-school deals, unseating TV. Some 55% of parents expect to head online to discover the best deals, up 22 percentage points from last year. Other influencers include family (42%), friends (41%) and television (38%.)

Still, 57% of those with kids in grades K-12 say they plan to buy only what the family needs -- a 5-percentage-point increase from last year. And 35% intend to reuse last year’s items -- up from 20% -- while 68% say they will scrimp on purchases for themselves to pay for back-to-school.

Digital channels are big winners this year, with 78% of smartphone owners in the survey, which included 1,074 parents of school-age children, planning to use them to help in shopping, and 36% plan to shop online.

Separately, PriceGrabber released its first BTS survey, predicting that 68% of parents intend to spend up to $500 this year -- an increase from 63% last year, and 48% in 2011. And 17% plan to spend between $500 and $1,000. That survey, based on nearly 2,200 U.S. parents, also found that parents are increasingly interested in classic and practical purchases.

Parents in this survey also intend to reuse items when possible, shopping online and in mass channels to save money.

Earlier this month, the National Retail Federation predicted a smaller spending increase than last year, with parents of school-age children shelling out $634.78 on apparel, shoes, supplies and electronics, down from $688.62 last year.