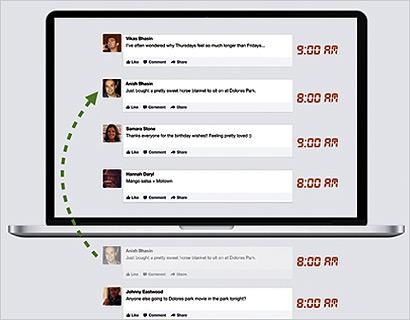 Facebook on Tuesday said it would begin publishing blog posts dedicated to explaining ongoing changes to the news feed, the central feature of the social networking service. The company’s effort to be more transparent about news feed revisions -- and the thinking behind them -- began today with a few changes, including a step to surface more older posts in users’ feeds.

Through a tweak to the news feed ranking algorithm, “organic stories that people did not scroll down far enough to see can reappear near the top of News Feed if the stories are still getting lots of likes and comments,” stated the inaugural News Feed FYI blog post. In short, updates missed initially get bumped back up in the feed to help boost overall engagement.

In tests, Facebook said the change resulted in a 5% increase in the number of likes, comments, and shares on the organic posts people saw from friends, and an 8% increase across the same metrics from brand pages on the site. Where people previously read 57% of updates, on average, the ranking change has led to 70% of updates being read.

“The data suggests that this update does a better job of showing people the stories they want to see, even if they missed them the first time. For Page owners, this means their most popular organic Page posts have a higher chance of being shown to more people, even if they're more than a few hours old,” according to the post by Facebook Engineering Director Lars Backstrom.

He noted the average Facebook user typically has 1,500 updates they could see, ranging from close friends to acquaintances to brands they follow. The company’s EdgeRank algorithm prioritizes about 300 each day based on user “signals” from likes to their frequency of interactions with friends, pages or public figures.

In that vein, Facebook has also begun ranking posts according to the 50 people you most recently interacted with on the site, such as by looking at their profile or liking their feed updates. Based on that “Last Actor” activity, a user would see more updates in their feed from those people.

Despite the changes designed to increase interaction in the news feed, Ari Rosenstein, vice president, marketing at Adotomi, a Facebook Preferred Marketing Developer, said brands should still focus on news feed ads for “better targeting, larger reach, and the ability to better control the duration of the message.”

During Facebook’s earning conference call in July, CEO Mark Zuckerberg said about one in five of post people see in their news feeds now are ads. He suggested the company would invest more on improving the quality of news feed ads by increasing the number of marketers and overall demand in the bidding process for ad placement.

Facebook began rolling out a major overhaul of the news feed in March featuring a more streamlined and visually focused design across its desktop and mobile versions. The changes were seen as influenced by the rise of more photo- and image-centric social properties like Pinterest, Instagram and Tumblr.