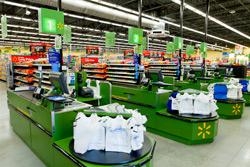 For those inclined to be gloomy about consumer spending trends, sales results just in from Wal-Mart and Kohl’s are providing plenty of ammo.

Wal-Mart says its comparable-store sales slipped 0.3% for the second quarter, although net sales rose to $116.2 billion, an increase of 2.4%. And it’s predicting that third-quarter comps, which will include spending on back-to-school items, will be relatively flat. (Net income for the quarter climbed 1.3% to $4.1 billion.)

"Consolidated net sales and our Walmart U.S. comp were below expectations,” says Mike Duke, president and CEO of Wal-Mart Stores. Describing the retail environment as challenging, he concedes that "there are areas of our business where we can do a better job, and we will. While it will be difficult, we believe the steps we're taking to control costs, especially in International, will bring us closer to our full-year leverage goal.”

The company says consumers spent less, which it attributes to the payroll tax increase. Comparable-stores foot traffic declined 0.5%, while average ticket spending edged up by 0.2%.

At Kohl’s, which targets a slightly higher-income customer than Walmart, comparable-store sales ticked up 0.9%. The Menomonee Falls, Wis.-based chain says it was pleased with those results, but profits slipped to $231 million, down from $240 million in the same period a year ago. And the company lowered its forecast for the quarter ahead.

“Competition from other channels continues to pose a threat to Kohl’s and its value department store counterparts,” says apparel analyst Ali Lipson, who follows the company for Mintel, in emailed comments. “Despite Kohl’s designer collaborations in apparel, many shoppers have flocked to discount stores and outlet stores when searching for designer apparel at affordable prices. Furthermore, part of Kohl’s ability to offer low prices is by operating no-frills, lackluster stores. Many shoppers may seek alternate retailers for a more pleasant and engaging shopping experience.”