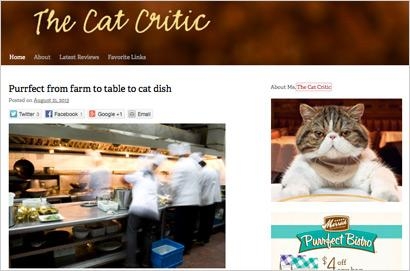 The effort is using the Dining section of The New York Times as its official centerpiece for the initiative.

W. “Mittens” Bloomfield, a "Cat Critic,"  is featured in the ads. Mittens also is writing his own blog.

Purrfect Bistro foods are made in the USA with the freshest, locally grown ingredients. The Cat Critic is designed to appeal to passionate pet parents and educate them about the new Purrfect Bistro line and its 21 recipes that span a spectrum of tastes, textures and protein sources.

The campaign will run through September.

“The revolution is all about bringing pet food to a new level,” Brace tells Marketing Daily. “The recipes provide balanced nutrition, with health you can see in the bowl, and more importantly, in your pet.”

Pet parents believe their cat is the ultimate food critic, a key insight that led to the Cat Critic campaign. Cats want the best-tasting, highest-quality food or they will turn their noses up at it.

The campaign will be supported by social advertising and content, on such sites as Serious Eats, Eater, Pet360, Cat Channel, Food Republic, FoodBeast.

Merrick also will be conducting its own Klout Perk program, offering Purrfect Bistro recipe samples to both cat and food influencers inspiring them to write their own Cat Critic-esque reviews on the MerrickPetCare.com site.

Social media supports the effort on Twitter where users are invited to use the hashtag #TheCatCritic. Merrick also is promoting it on its Facebook page.

Purrfect Bistro is a 21-recipe premium product line that offers a variety of high-protein, canned and dry cat foods. It includes five dry, 16 wet, and all are 100 percent grain-free.