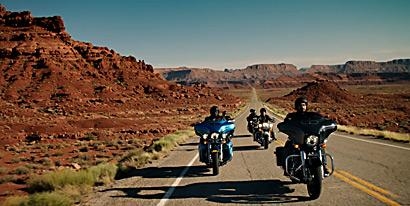 The Nature Conservancy, an environment research, awareness and preservation NPO, has inked a partnership with Harley-Davidson timed with the Milwaukee-based motorcycle manufacturer's 110th anniversary. The global program, dubbed "Renew the Ride," is meant both as a way to spread the conservation message -- and the Nature Conservancy’s own identity -- to the Harley-Davidson community and dealers, and give H-D a conduit for fund preservation and renovation of Brazil's beleaguered rainforest. Harley, specifically, will fund the Plant a Billion Trees Campaign for Brazil’s Atlantic Amazon region.

For its part, the Conservancy will have a presence at Harley-Davidson's 110th Anniversary event in Milwaukee, which -- based on general consensus -- will probably draw a crowd of around 100,000 riders and aficionados.

Geof Rochester, CMO of the Nature Conservancy, tells Marketing Daily that partnering with major brands helps change perception of environmental groups as parochial organizations standing in opposition to commercial enterprise. "For a long time people had the idea of the 'green movement' as crunchy; what we know now is that people have never cared more deeply about the environment; so one of our agendas is to remind people that the environment is for everyone."

He notes that the Conservancy has partnered with Macy's and Subway, and is now a research conduit for Dow and BP. In the past year, per Rochester, the organization has also partnered with Disney around a program called "Nature Rocks," and with Discovery. "We are focused on partnering with mega brands with strong audiences; when they are interested, it's a sincere interest. I would say consumers are making choices based on brand values and today the CMO is trying to make sure their brands stand for something."

The Macy's partnership, the Macy's program, "Give, Get, and Save the Rainforest," also involved support of the Amazon recovery programs, and featured pop-up stores, and in-store merchandise inspired by Brazil. It also involved advertising and digital elements. The program with Subway involved promotional elements in 24,000 stores with, among other things, endangered species depicted on packaging.

"We are always having conversations with Fortune 100 consumer brands, with nations like China, Brazil, Mexico, and Africa," says Rochester. "But our job isn't done if we are just talking to corporations and governments. We have to bring the message to consumers."